A team of engineering researchers led by Dr Aristides Kiprakis have conducted a study that challenges the rules which currently govern the layout of tidal turbines.

Experiments carried out by the team at the School’s Flowave Ocean Energy Research Facility have shown for the first time through physical tests that arranging tidal turbines in a close formation – or ‘array’ – results in increased power capture.

Dr Kiprakis’ team’s findings are showcased in a paper titled "Experimental Assessment of Flow, Performance and Loads for Tidal Turbines in a Closely-Spaced Array” which has been published in the MDPI Energies journal, and recently won an Editor’s Choice Award.

The team’s experimental methods and findings will be useful for further scale-testing of turbine arrays elsewhere, for refining computer models of arrays and for assessing their performance taking into account factors such as forces exerted on the turbines by sea waves. 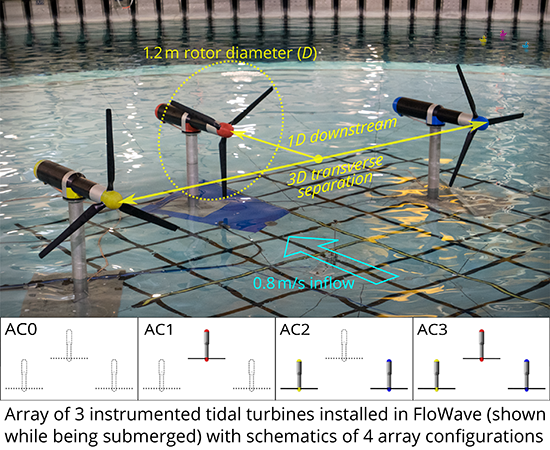 Image: An array of three tidal turbines installed in the FloWave tank during experiments

Dr Kiprakis explained: “Existing empirical rules in tidal array layout design dictate that the separation between units should be in the order of 10 to 15 rotor diameters. Modern tidal turbines have rotor diameters upwards from 20 m, meaning that the distance between neighbouring machines can be several hundreds of meters.

“Our findings show that this should not necessarily be the case; a closely spaced array will potentially increase energy yield and profit, while at the same time will allow the developer to make a more efficient use of the seabed, and reduce the cost of the offshore grid, compared to an installation with more typical 10–15 diameter spacing between rows of turbines.

Watch the video 'Tidal array testing at FloWave' on MediaHopper

This research was funded by the UK Engineering and Physical Sciences Research Council (EPSRC) through the SuperGen UK Centre for Marine Energy Research (EP/M014738/1) and project FloWTurb: Response of Tidal Energy Converters to Combined Tidal Flow Waves and Turbulence (EP/N021487/1). Support from the EPSRC for funding the FloWave Ocean Energy Research facility (EP/I02932X/1) is also acknowledged.

The team is extremely grateful to all the staff at FloWave and others who worked on this series of experiments for their assistance in making this research possible.