Professor Sean Smith has proposed a new technical taskforce to retrofit millions of Scotland’s homes, as part of a proposed strategy to slash greenhouse gas emissions recently published by the Scottish Government.

The recommendation was developed by Professor Smith to support the nation’s goal to reach net zero emissions by 2045, through a future technical roadmap, ambitious energy performance targets and net zero housing objectives.

To reduce the emissions to meet ambitious net zero targets, Scotland – like many other countries globally – will have to invest in major housing retrofit programmes to improve energy efficiency.

Scotland’s task is slightly more complex than the rest of the UK due to its comparatively high proportion of flats and apartments, which represent 40% of the housing stock, versus 18% in England and 10% in Wales and Northern Ireland.

The mix of owner occupancy, privately rented and social housing within the same block of flats and apartments also adds to the difficulty of choosing and project managing retrofit solutions both for external insulation ‘fabric’ and the installation of future low carbon energy systems.

To meet its 2045 net zero target, Scotland will have to upgrade and retrofit approximately 2.6 million homes – potentially 113,000 homes each year. There are separate UK and European targets to reach net zero by 2050 – which would require retrofitting 800,000 homes in the UK and 11.6 million homes in Europe every year respectively.

In the recently published government paper (A), Professor Smith, who is Director of the Centre for Future Infrastructure (Edinburgh Futures Institute) and Chair of Future Construction (School of Engineering) recommends establishing a Housing Retrofit Technical Task Force to tackle this challenge.

The task force, which would be the first group of its kind, would bring together a wide range of social housing and industry representatives, energy experts and skills development teams into one body, uniquely placed to help the Scottish housing sector maximise energy efficiency.

The task force would focus on retrofitting the major Scottish housing archetypes reaching across both urban and rural Scotland, through measures such as ‘fabric first’ approaches – using high performance insulation materials, followed up by low carbon energy systems for heating and hot water.

Professor Smith said, “With so many countries globally moving towards new retrofit solutions at the same time, this will place significant demands on materials, technologies and skills. Having a pan-Scotland approach to optimise solutions and productivity steered by a technical task force will greatly assist in sector readiness, delivery and carbon reductions”. 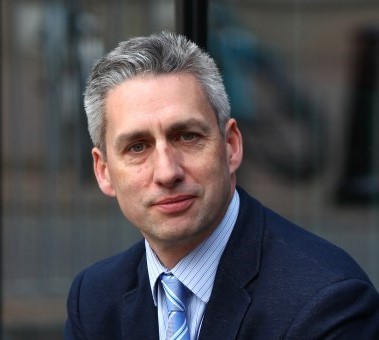 The group was convened by the Minister for Local Government, Housing and Planning to provide practical recommendations to help the social housing sector meet climate change targets.

Professor Smith has successfully used such a roadmap approach previously when he led the delivery of innovative technical solutions for all attached new-build housing, to improve sound insulation performance.

The new designs were used in over 1.3 million new homes built across the UK, leading to enhanced sound insulation for their occupants and a substantial improvement in compliance with regulatory standards.

Smith is also Chair of the Infrastructure and Environment thematic leadership group within the Scottish Research Partnership for Engineering (SRPe) and serves on several City Region Deal boards and advisory groups for South East Scotland.