The UK’s first Hyperloop test track has been built by students from the University’s HYPED team, at the King’s Buildings.

Touted as a future fifth mode of transport, Hyperloop technology would see pods carry people and cargo at high speeds through steel tubes between terminals.

Hyperloop is designed to use less energy. The pods are magnetically levitated just above the track, thereby reducing the slowing effects of drag. It is also envisaged that pods would travel through near-vacuum tubes where most of the air has been removed to reduce aerodynamic resistance and energy use.

Popularised by entrepreneur Elon Musk, Hyperloop’s advocates believe it could be a more sustainable alternative to short and medium haul air travel – potentially achieving a London to Edinburgh commute in 50 minutes.

Edinburgh’s HYPED team is dedicated to advancing Hyperloop, and is the leading university team developing the technology in the UK. It provides a testing ground for engineering students to tackle the technical challenges of building a functioning Hyperloop pod from scratch. 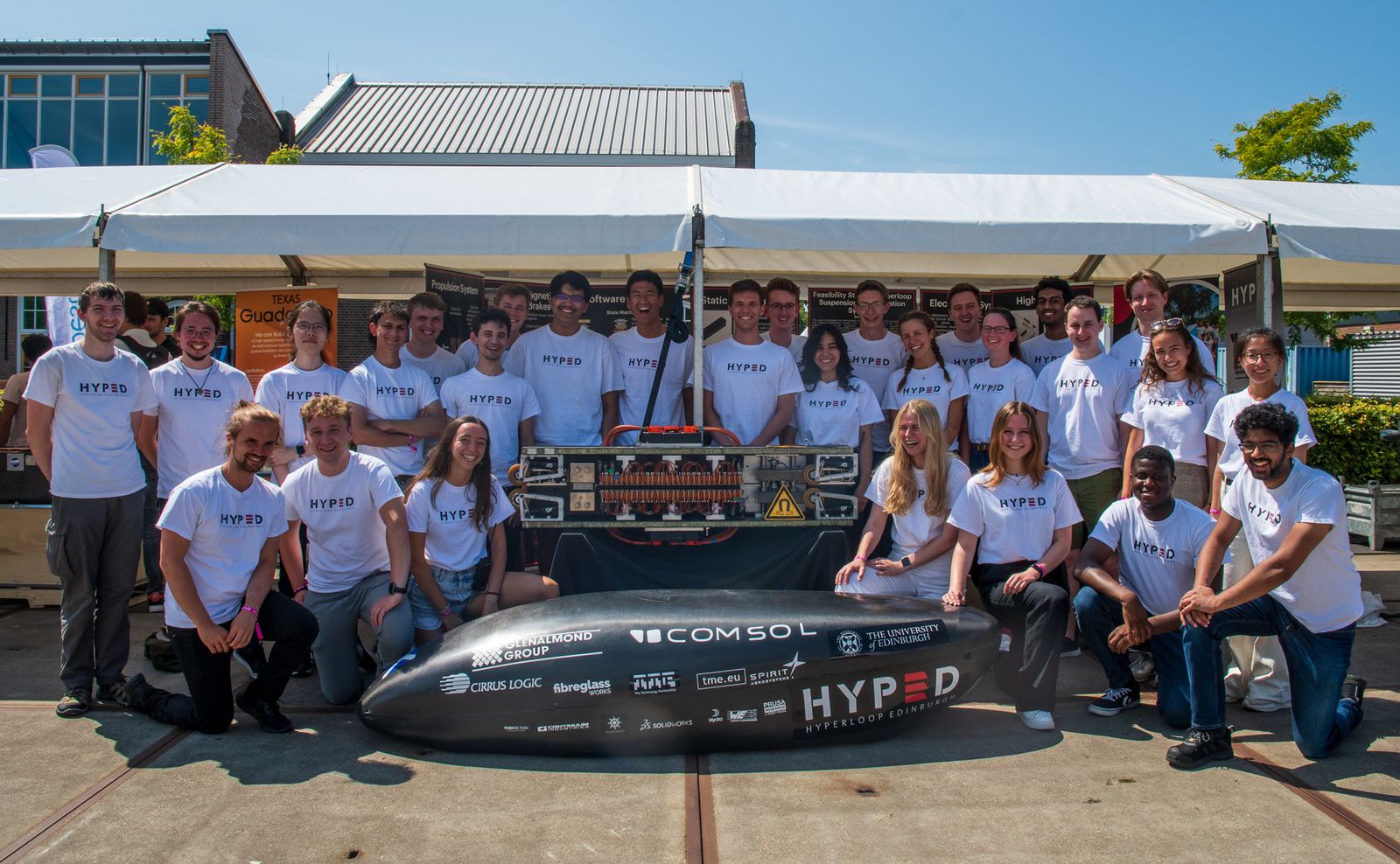 The HYPED team with their Hyperloop pod prototype ‘Greyfriars Poddy’ at European Hyperloop Week 2022 in Delft, the Netherlands

The new test track is a key missing piece of the jigsaw for HYPED. Each year the team competes in international competitions alongside other top university teams from around the world – which often requires them to test their pod on the track on competition day itself, without having the chance to properly trial it beforehand.

The track is a 100-metre-long aluminium rail, travelling in a straight and smooth line over a concrete foundation, designed by HYPED’s student engineers and located on Max Born Crescent, between Murchison House and FloWave.

The rail was manufactured with support from the University of Edinburgh’s Estates Department, the College of Science and Engineering, and the schools of Engineering, Physics and Astronomy and Informatics.

Prototype pods, which range from three to five metres in length, will potentially reach up to 90 mph over the track, once testing begins in November. Installed just a short walk from the HYPED lab in Hudson Beare building, the track will provide the team with an accessible way to test and validate their design ideas and prototypes for the first time.

After constructing their first pod prototype in 2017, HYPED has grown into a thriving and diverse society of around 130 students from across the University. Before the pandemic, they were the only UK-based team to qualify for the annual SpaceX Hyperloop Pod Competition in California for several years running until the competition ceased in 2019.

In more recent years, they co-founded European Hyperloop Week alongside other top European university teams Delft Hyperloop, Swissloop and Hyperloop UPV – as an annual gathering to bring those working on the technology together, to compete, network, and share ideas.

The team also runs outreach events to inspire school children and the members of the public about Hyperloop technology, and STEM subjects more widely. This includes an upcoming ‘Gender Minorities in STEM Workshop’ for students in Scottish secondary schools in November, where they hope to showcase the track.

Gregory explained: “We will use the track as a space to validate our technical designs and demonstrate our vision of Hyperloop to the Edinburgh community. By engaging with the local community, we want to increase awareness of Hyperloop technology and inspire young students to pursue early careers in STEM.”

“The test track is a leap forward for the society to ensure HYPED provides an innovation-centred ecosystem for University of Edinburgh students to develop and generate value towards Hyperloop development.”